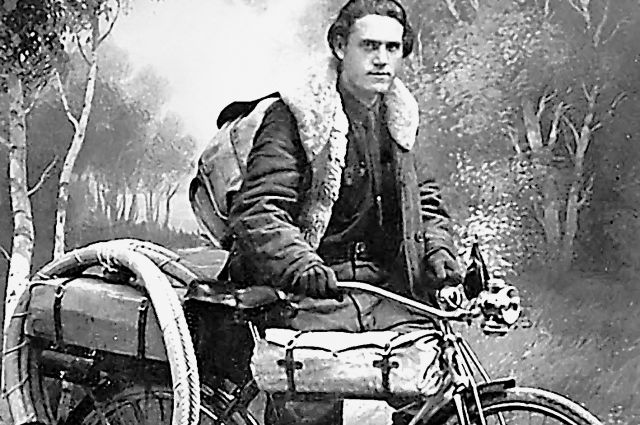 He traveled all over the USSR and dreamed of circling the world on bicycles, but for border in 1931 he was not let out.

The name of the Russian traveler Gleb Travin, alas, not on heard. And after all, in April of this year we could celebrate its 120th anniversary — loudly, under the motto “Know ours!”. Because Travin — the only one who made a bicycle trip along the borders of the USSR, including the Arctic coast. 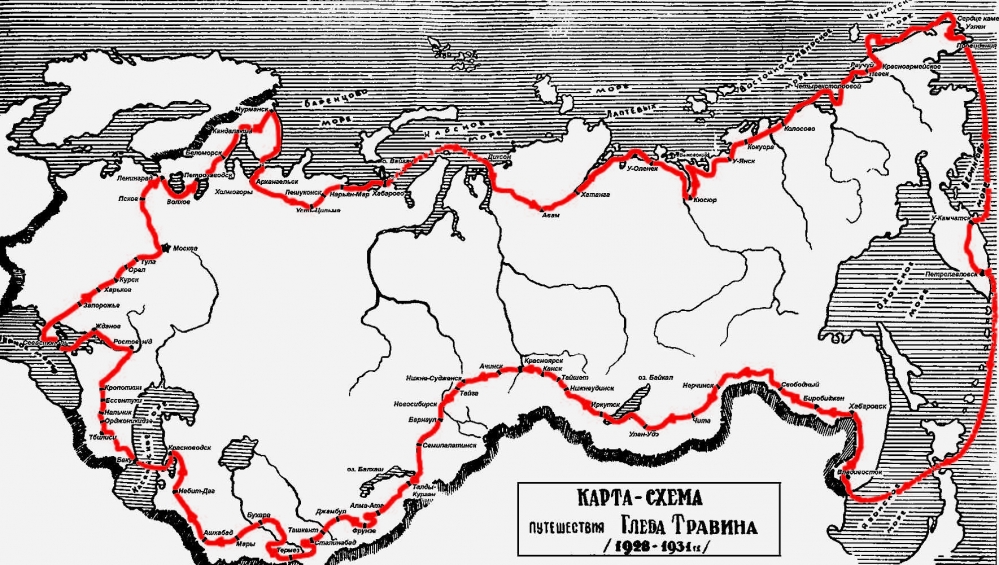 The grand odyssey took Travin three years (1928-1931). During this time, he overcame 30 thousand km. Dozens of times I found myself on the hair of death: in the desert miraculously escaped the attack of a cobra;But the most dramatic moment of the trip happened in the early spring of 1930, when Gleb had to amputate two of his own toes due to frostbite. The cyclist rode along the ice along the western coast of Novaya Zemlya to the Vaygach Island. “All day a hurricane east wind blew. Its heavy gusts threw me off my bike and dragged me across the ice. Rescued the knife. I plunged it into ice and hold handle until the wind died down a little  — the traveler recalled. — I sleep on    back       — it was warmer that way. When I woke up, I could neither unclench my hands nor turn around… At night, a crack formed near my lodging for the night. The water came out, and the snow that covered me turned into ice. I appeared in an ice suit. I had a knife on my belt. With great difficulty, he freed one hand, took out the knife and began to beat the ice around him. The ice broke off into small pieces. I was pretty tired before I freed myself from the sides. But it was impossible to upholster yourself from the back. I rushed forward with my whole body — and felt that he had acquired an ice hump. And the boots also could not be released completely. From above, I cleared them of ice, and when I pulled out my legs, both soles remained in the ice. The hair was frozen and sticking out like a stake on the head, and the legs were almost bare. Frozen clothes made it difficult to get on the bike. I had to trudge with on a snow crust.

I was lucky: I got a deer trail. Someone recently rode on a sled. For a long time I followed this trail. In eventually it led to housing. I climbed island and saw smoke on the mound. My legs suddenly fainted from joy. I crawled on on hands to the Nenets plague.

The Nenets, noticing me, started to run. I looked like  an alien from another planet: an ice hump on my back, long hair without a hat, and a bicycle, which they probably saw for the first time.

In travin's plague amputated two frostbitten toes on his own foot for fear of gangrene. The Nenets, in whose eyes this “operation” was going on, could not stand it, ran out into the street.

Could be a polar fox

The next day, Gleb left the hospitable tent. And this day was one of the worst for the entire expedition. He moved his legs with difficulty and was so weak that a fox dared to attack him from his back. Before he killed the animal with a knife, he managed to bite him. A few days after that, Travin was tormented by the fear that the animal was rabid: “After all, they never attack a person alone! Or am really so weak that the arctic fox chose me as its prey?»

From the outside, the journey might have seemed like madness. In fact, Travin had been preparing for it for five years. Gleb came up with the idea when in  1923 g. he, 21-year-old, met a Dutch cyclist Adolf de Groot in his native Pskov, who traveled almost all Europe. Soon he began his training. Ride  bike in any weather, any roads. The school of the father-forester came in handy, who taught his son how to find food and lodging for the night in the forest and in the field, eat raw meat.

After demobilization, Travin went to Kamchatka — it was important for him to test himself in other climatic conditions. Here he built a power plant, where he later worked as an electrician. And he devoted all his free time to training: he rode a bicycle through impenetrable forests, mountain paths, and crossing fast-moving rivers. He honed the art of a hunter and a fisherman. On the journey, he himself obtained provisions for himself. He managed to do this even in the arctic ice: “From” severe frosts, cracks form in the ice. Together with the water, a fish rushes into this crack. Later, I got the hang of catching it with a hook from a bicycle spoke. Two fish were enough for me for a day. I ate one fresh, the other — frozen, like a plantain.

In addition to fish, my menu included raw meat. From  local hunters, I learned to track down and shoot the northern beast — arctic fox, seal, walrus, deer, polar bear. About the fact that a person can eat only raw food for a long time, Travin subtracted from the & nbsp; French doctor Alain Bombard, who, while sailing on a rubber boat across the Atlantic, ate raw fish and plankton for more than two months. Gleb ate at 6 o'clock in the morning and at 6 in the evening  8 hours daily he spent on the road, another 8 — for sleep, the rest of the time — on & nbsp; searching for food, arranging an overnight stay, diary entries. Yes Yes! He kept a diary, which suffered a sad fate. Returning from the trip, he left his bicycle and diaries with sister, who burned them. The fact is that the first detailed essay on Travin's journey was published by the Novosibirsk writer and participant of several polar expeditions Vivian Itin. He met Gleb in 1931 at Cape Dezhnev, the easternmost point of the Union. Travin's campaign along the borders of the USSR ended there. But the cyclist dreamed of round the world and had been waiting for several months for permission to departure to America. After the meeting, Itin will first write a short material, and then, based on the results of the ensuing correspondence, a full-scale essay “The Earth Has Become Its Own” will be published. After the arrest and death of the writer in 1938  his works were banned. The situation changed only in & nbsp; 1956 & nbsp;, when he was rehabilitated. And then, in the 1930s, Sister Travina, having learned that the essay about her brother was banned, got scared and burned the unique documents. And  here is the bike, on which he traveled along the borders of the country, has been preserved. The exhibit can be seen in Pskov Museum-Reserve, where and its equipment — compass, knife, gun, trunk with spare parts and tools. And  the surviving passport-registrar, in which Gleb stamped during stops in various settlements. There are 270 marks in total.

At Cape Dezhnev, Travin broke up with the dream of round the world — he was not released abroad. He returned to Kamchatka. And he cut his long hair here: at the beginning of the trip he promised himself that he would cut his hair only after completing his plan. He fulfilled the minimum plan (a campaign along the borders of the USSR). A circumnavigation assumed movement along the western coast of America, then go around Tierra del Fuego, cross the Sahara and Arabia, visit India and China, turn into Tibet and Mongolia, return to Siberia along the Chuisky tract. This maximum plan had to be buried.

In Kamchatka, Gleb worked as an electrician for many years. He married a girl, Vera, whom he met even before his trip. They had three daughters and two sons. In retirement, he returned to his native Pskov region, where he died in 1979 at at the age of 77 years. The only radio interview of Gleb Travin has survived. Plus, in the 1970s, his memoirs appeared in a popular magazine, in which one poignant moment stands out. During the journey, he encountered a polar bear, which he shot for fear that she would attack. And next to she was a live bear cub! Gleb took it with  — the beast sat calmly in his bosom. This went on for several months, until one morning he found the bear dead. Since then, he never hunted polar bears, and the story of a bear cub hurt his heart until the end of days.

Travin's favorite literary hero was Don Quixote. Yes he and he was a knight of the road who defied the elements and remained unconquered.