Serious passions flare up in South Ossetia around the presidential elections. The current head of the republic, Anatoly Bibilov, and the leader of the Nykhas political party, advanced to the second round. Alan Gagloev. However, when the decisive vote is passed — still not clear. 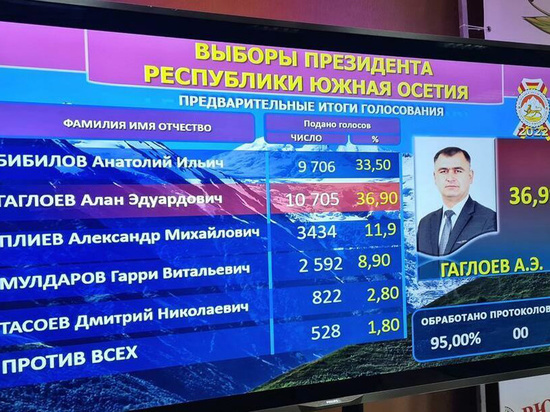 Recently, the Supreme Court of the republic recognized the decision of the Central Election Commission on the appointment of the second round for April 28 as illegal, thereby satisfying the claim of citizens. By law, the date of the second round must be set 15 days after the first, but there are a series of holidays ahead, and voting cannot take place on a holiday. Therefore, the CEC chose Thursday. After that, citizens Azamat Tanduev, Georgy Gagkuev and Radislav Utarov, who now live in North Ossetia, appealed to the Supreme Court with a lawsuit in which they expressed disagreement with such a decision.

Now, in accordance with the Constitution, the CEC is obliged to set a new election date for Sunday. The next non-working Sunday will be May 8 only. This somewhat complicates the situation for Alan Gagloev, who, following the results of the first round, is ahead of the current head of the republic by 4%. As part of the second round, debates began, and they are unlikely to play into the hands of politics. And the point is not only in insufficient experience, but also in changing the behavior of the opponent. If in the first round the current head only had time to fend off the criticism of his work rushing from all sides, now, left face to face with his opponent, he is ready to go on the offensive. And questions to Alan Gagloev, if you believe the media publications & nbsp; enough.

While the court was deciding on the legality of setting the date of the elections, there was a discussion on Telegram channels about how they are trying to influence this decision. The candidate clearly does not want to drag out the second round. Indeed, even in the first round, he has a small advantage, and the longer the campaign goes on, the more often references to the presidential candidate's younger brother appear in the media. Alexandra Gagloeva − brother of presidential candidate Alan Gagloev − accused of killing three people….

In 2004, on January 12, by car “KamAZ” loaded with apples … three people left … It is known that they were heading to Russian Cherepovets. Their corpses with traces of violent death were accidentally discovered only on June 8, 2020.

The day after the disappearance of three people, January 13, “KamAZ” found… without license plates and cargo. Someone Dzhagaev was driving, who, during interrogation, confessed to the murder and handed over two accomplices – Alexander Gagloev and Gennady Kulaev.

The investigation also established: now a presidential candidate of the Republic of South Ossetia, and then a KGB officer, Alan Gagloev entered the Russian Federation right after the same KamAZ car; with a load of apples. Bagangaji Bagandov, the brother of one of those killed, reports this on his telegram channel.

Alan Gagloev denied his connection with the incident, explaining the crossing of the border by the fact that he allegedly went on a business trip … After the discovery of the remains of the dead, immediately, on June 9, a criminal case was initiated … September of the current year [2020]… was detained a citizen of the Republic of South Ossetia Gagloev Alexander Eduardovich on suspicion of committing the specified crime”, – Eduard Tandelov, a senior investigator at the Prosecutor General's Office, told reporters. The investigation is still ongoing, the perpetrators have not been punished…

Alan Gagloev during the debate said that “he does not consider his brother and himself guilty.”

However, this is not the only high-profile accusation against Alexander Gagloev. According to the Political News Agency, “during the TV debate, Anatoly Bibilov said that Alexander Gagloev, the brother of candidate Alan Gagloev, was collaborating with terrorists.

Alexander Gagloev, as the investigation established, tried to arrange a series of terrorist acts on the territory of South Ossetia.

In December 2020, the General Prosecutor's Office of the Republic reported that an investigation was underway against Alexander Gagloev and other persons about their involvement in terrorist activities, “stopped unreasonably. The Prosecutor General's Office of South Ossetia decided to resume the criminal case…It became clear to the law enforcement officers that in due time someone effectively hushed up the case".

All this looks very ambiguous against the backdrop of the election campaign of Alan Gagloev, which, according to him, is focused primarily on restoring the rule of law in the republic. In an interview with RIA Novosti, Gagloev said that “it is impossible to return the republic to the rule of law without restoring confidence in law enforcement agencies, without a fair investigation of some high-profile cases”…

While the candidates are diligently confronting each other, it is hard not to notice the unusual behavior of the usually quite active observer of — Georgia. The neighbor, who always clearly expresses his position in relation to the elections in Ossetia, is now silent for some reason. Perhaps because the peculiarities of the biography of one of the candidates are of much less concern to the Georgian government than the frank desire of the other to strengthen relations with Russia. Indeed, while Bibilov declares that South Ossetia intends to hold a referendum on joining Russia, Gagloev seemed to support the idea of ​​a referendum. However, according to some politicians, there are & nbsp; interest in the development of Georgian integration into South Ossetia. Isn't  Is the road to Georgia his dream?  It is difficult to say why the dream is such. “How can one explain the fact that he has already visited the border territories in the Leningorsky district, where a little more than two thousand voters live, five times already, although, by his own admission, he does not have time to visit other regions of South Ossetia,” —  asks the Political News Agency.

We can only hope that the time received thanks to the court decision will be enough for people to figure out which of the candidates is ready to fulfill their promises, and which is just a cat in bag.