“Time H” is rapidly approaching on the eastern, Chinese front of the global cold war. By raising the stakes on the Western, Russian front and provoking Beijing into a “special operation” against Taiwan, America is implementing a suicidal “two-front” war strategy. 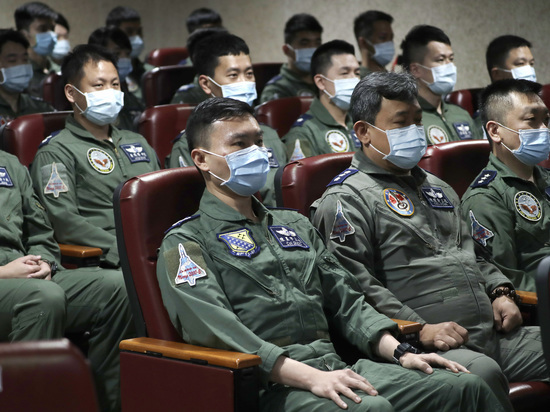 Moscow made its own assessment of readiness to protect national interests and launched a preemptive strike on Ukrainian “kamikazes”. Their assessment of readiness to defend sovereignty and territorial integrity is being completed in Beijing. They use a tip-on-tip strategy. In the 1950s, during the Taiwan Strait Crisis, the Chinese responded to the maneuvers of the US 7th Fleet with hundreds of “most serious warnings”. Now the response to the actions of the Americans and their Taiwanese wards are increasingly large-scale military actions. It is already clear that the exercises “under conditions as close as possible to combat” are a rehearsal for a full-scale operation to eliminate the separatist regime in Taipei. There are more and more reasons to take action. Deliveries of increasingly lethal weapons. The arrival of hundreds of American “advisers on the operation” of these weapons. Visits from increasingly senior political figures, including heads of US Congressional committees, calling for the “independence” of the rebellious Chinese province.

In Beijing, they choose a good moment to start the “peaceful reunification of the motherland.” It was defined by the 19th Congress of the CPC (2017) as one of the 14 priority tasks of the ruling party until the middle of the century. This autumn, the regular 20th Congress of the CCP will be held…

Most experts in China and beyond agree that China's and Taiwan's military capabilities are simply incommensurable. But Taipei still entertains hopes of American intercession. Despite the lack of commitment to defend Taiwan after the severance of diplomatic and military relations in 1978, the Americans have maintained the so-called “strategic ambiguity” all these years. She lurked between the lines in the “Taiwan Relations Act”, adopted by Congress back in 1979 as a “consolation prize” not so much for Chiang Kai-shek, but for hard-nosed anti-communists in the United States itself. The ambiguity persisted in a new edition of the obsolete insurance policy called the Taiwan Support Assurance Act. It was adopted at the end of President Trump's trade war. (Taiwan Assurance Act of 2020). The document did not go further than promises to “sell or permanently transfer to Taiwan defensive weapons systems and support meaningful participation of Taiwan in the activities of global organizations.” But President Joe Biden and his “siloviki” have repeatedly stressed that they recognize the principle of “one China” and are not going to get involved in armed clashes.

The hopes of the Taiwanese leaders for support from the United States finally disappeared with the start of the Russian operation in Ukraine. “Paper Tiger” is clearly not going to come close to an open fire. But he retains influence on the countries connected with him by chains of security treaties and trade relations. It is the unexpected solidarity of the West in imposing sanctions against Russia that creates a pause in the adoption of a fateful decision. Beijing is weighing the possible consequences of the inevitable.

China is now the world's top trading power with an annual turnover of $6 trillion! China holds 3.3 trillion dollars in the treasuries of the US and other Western countries! China transports over 80% of its exports and imports by sea! It is not difficult to project the sanctions imposed on Russia onto these parameters. Even if one doubts the possibility of copying anti-Russian sanctions due to the higher level of interdependence between the West and China, the risk of serious consequences remains quite high.

China is no stranger to sanctions. For the first 30 years of its existence, the PRC lived and developed under the conditions of the trade and economic blockade of the West. It was removed only after Beijing joined the confrontation with the USSR in 1978.

The likelihood of a trade and economic confrontation with the West began to be taken into account by the leadership of the PRC after the 2008 global financial crisis. China is almost the only one to get away with it by not following the World Bank's instructions to pump reserve money into the financial system. Instead, Beijing has focused on supporting the real sector, building high-speed rail and highways, and expanding housing construction. The West was filled with anger and began to demand a revaluation of the Chinese currency, threatening “disastrous consequences.”

In the first weeks of his tenure in 2012, new Chinese leader Xi Jinping announced a nationwide mobilization program. It is called “The Chinese Dream of the Great Rejuvenation of the Chinese Nation”. By 2049, the PRC should become a mighty socialist state. The long journey is divided into three stages, and the goals of the first were completed in full and on time. In 2021, GDP doubled, Chinese per capita income also doubled, 100 million people lifted out of poverty, and the middle class surpassed 400 million. These successes were ensured by the growth in the mobilization of the ruling party and the entire nation, the implementation of effective economic and social reforms.

To reduce the country's dependence on foreign markets, a strategy of “new normal” was launched with an emphasis on the development of its own scientific developments, the production of domestic goods of the highest quality, and the elimination of unprofitable and obsolete industries. In order to tame corruption from episodic executions of embezzlers who got caught, Beijing switched to a systemic struggle based on a special party structure, the “Commission for Checking Party Discipline.” For three years, she investigated 1,400,000 cases of party members holding leading positions in the economy and the administrative apparatus. Unexpected blows were inflicted on the “siloviki”, moreover, occupying the highest positions in the army and security agencies. The Communist Party, which had grown to more than 90 million members, began to turn into a combat-ready administrative structure with strict discipline and one-man command.

Already in the first 5 years of mobilization, Xi Jinping managed to do a lot. At the 19th CPC Congress in 2017, his innovative Chinese Dream program was approved and became the long-term strategy of the party and the state. The contribution of the leader himself, who gathered in one hand the powers of the General Secretary of the ruling party, the Chairman of the People's Republic of China (President) and the Commander-in-Chief of the Armed Forces (Chairman of the Military Council of the CPC Central Committee), was highly appreciated. The rule introduced by Deng Xiaoping to stay in the highest party post for only two five-year terms was cancelled. In essence, Xi Jinping was recognized as equal to Mao Zedong and Deng Xiaoping, the new leader.

The establishment of order in the structures of party and state power and the nomination of a new leader of the nation turned out to be very timely. The decisions of the 19th Congress of the CPC were rightly regarded in Washington as the final refusal of the Celestial Empire to follow in the wake of the system of liberal capitalism. Trump's trade war, information wars due to the covid pandemic, stimulation of the “color revolution” in Hong Kong and separatist tendencies in Taiwan were the answer.

After coping with the consequences of the trade war and the pandemic, Xi Jinping decided to move to a new level of national security. Strong dependence on exports has declined quite rapidly since the 2008 financial crisis. At that time, the share of exports in China's GDP was 32%. By 2019, this figure had dropped to 17.4%. But the vulnerability of the economy as a whole, and especially of the export-oriented maritime provinces, persisted. Therefore, in October 2020, at the 5th Plenum of the CPC Central Committee, a new strategy called “double circulation” was considered and approved. It provides for the priority of “internal circulation” of goods over “external circulation”, of the internal market over external markets.

To strengthen the homogeneity of society and accelerate the growth of the internal market through a more equitable distribution of national wealth, a completely new campaign “for the common welfare” is called upon. “. Its essence is to convince billionaires to “voluntarily” contribute money to various charitable foundations and programs. Billions of dollars are already flowing into the accounts of those in need.

Understanding the inevitability of more or less long-term economic consequences of the annexation of Taiwan, Beijing still proceeds from the priority of the historical task of overcoming the split of the nation. The accelerated creation of “Anti-China” in Taiwan, the upbringing of young people in the spirit of “Taiwanese identity” and hostility towards compatriots from the mainland, the forced pumping of American weapons and the revival of its own nuclear program put Beijing in a hopeless situation. You will have to pay a dear price for delay later.

The Chinese leader's train of thought is conveyed by a wording that is often repeated in his speeches to the leadership of the party and the army. “We will resolutely follow the path of peaceful development, but we will not categorically give up our legitimate rights and interests and will not sacrifice the fundamental interests of the state … No country should count on us to trade in our key interests, no one there can be no hope that we will taste the bitter fruits of infringement of the sovereignty, security and development interests of the state.”