An online game Wordle is gaining popularity around the world, which was developed by one person and exists only in the web version. As of November 1, 2021, 90 daily users were playing Wordle, and by the beginning of January their number had grown to 300,000 people, according to The New York Times.

What is the point of playing Wordle?

The original Wordle game exists in English. It is posted on the developer's website.

The player must guess a five-letter English word in six tries. During the first attempt, the user can enter any word that fits the size. After confirmation, the entered letters are highlighted in different colors:

• green – if the letter is guessed correctly and it is in the correct place;

These hints allow players to get closer to solving the word each time.

The game is allowed to complete only one puzzle per day, while all users solve the same word. 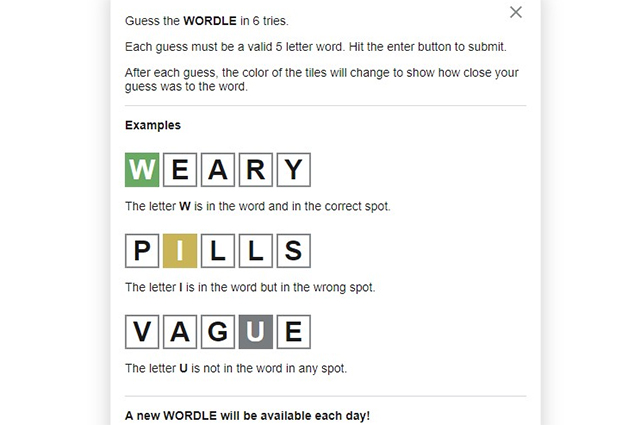 Wordle was created by Brooklyn-based software engineer Josh Wardle. He named the game after his last name.

Wardle first prototyped an online word puzzle in 2013. But then the game did not impress his friends, and the software engineer stopped working on it. However, in 2020, Wardle returned to the puzzle, creating it exclusively for himself and his girlfriend Palak Shah. During the lockdown, the developer's beloved became interested in solving crosswords and puzzles. “I wanted to come up with a game she would like,” – quotes Wardle in The New York Times.

The couple worked out the words for several months, and after that, Wardle sent a link to the game to their relatives. The developer’s relatives liked Wordle, and in October 2021 he decided to make the game available to users from all over the world.

According to Wardle, limiting the number of parties to one per day was a breakthrough. This increased the feeling of scarcity, it made users want more.

Players also liked the simple website that hosts the game. It doesn't have distracting banner ads or other annoying elements.

“I think people kind of appreciate that there's this thing on the internet that's just funny,” – Wardle noted. – This is not an attempt to do something shady with your data or your eyeballs. It's just a fun game.

As the game became popular, users began to post on social networks about their success in guessing the word, by typing a grid of green, yellow and gray emoticons. Wardle noticed this and developed an automated way to allow players to share their results on Twitter without spoilers. Also, together with his girlfriend, he sorted out five-letter English words, weeding out those that, in their opinion, little-known.

< p>Wordle is now available to users around the world, but Palak Shah says she appreciates that Wordle originally created the game for her. “That's very nice, – she said. – This is definitely how Josh shows his love.

Is there Wordle in Russian?

On January 10, an analogue of Wordle in Russian was launched by Twitter user @sudo_belousov. The rules are the same: six attempts to solve a five-letter word, highlighting the letters in three colors, one word per day. According to the developer, more than 10,000 people played the game in two days of its existence. He said that he was preparing a mobile application with the game for the App Store and Google Play.

Meanwhile, on January 12, Apple announced that it had removed applications with clones of the Wordle game from the App Store. Josh Wardle previously decided not to release it as an app or monetize it. According to Apple management, Wordle analogues violate the company's policy regarding applications that copy other people's ideas.